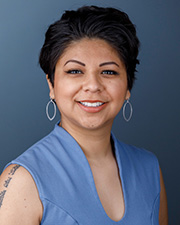 LAWRENCE — For its history as a science, economics has struggled to recruit both women and underrepresented minorities into the major field of study and profession.

Josephine Lugovskyy, director of the KU Economics URMW pipeline program at the University of Kansas, is available to discuss this concern with the media.

“The debate over the minimum wage, the gender pay gap, canceling student debt – just about any topic that currently concerns the economy could benefit from a diversity of viewpoints,” said said Lugovskyy.

“Most economic problems are multi-layered and have many outcomes that affect different segments of society in different ways. Full representation is the only way to ensure that everyone is heard and all points are considered before developing a designation policy.

In response, Lugovskyy implemented a new strategy, which was helped in part by the 2021 American Economic Association (AEA) Departmental Seed Grant for Innovation in Diversity and Inclusion that was awarded to the economics department of KU.

“Economic theories and policies too often allow for the current state of affairs, and not all social groups and classes benefit as much as they can or should,” said Lugovskyy, assistant professor of economics at the KU.

“The goal of the KU Economics URMW Pipeline program is to reverse this trend and promote diversity and inclusion for all groups in the field, especially underrepresented minorities – Indigenous, Latina and African American – and women.”

The Pipeline program is both a recruitment and academic assistance program designed to encourage underrepresented minorities and women (URMW) to enroll in the accelerated master’s program in economics. It will officially launch in the fall semester of 2022 but is currently offering a soft launch this semester.

Pipeline students will have access to upper division tutoring services, a dedicated academic advisor, workshops focused on topics of interest to URMW students (such as how to apply for a job after graduation of their degree) and mentorship from URMW faculty and a senior student. in the program. The goal is to recruit at least 10 students in its first year.

“The involvement of diverse viewpoints directly affects policy decisions in the economic realm,” said Lugovskyy, whose research focuses on minority economic issues and wealth inequality. “Current decision-making prioritizes to the wants and desires of those in this role.To fully promote equality, all ethnicities, genders and races should be part of this process.

Why it’s concerning for experts