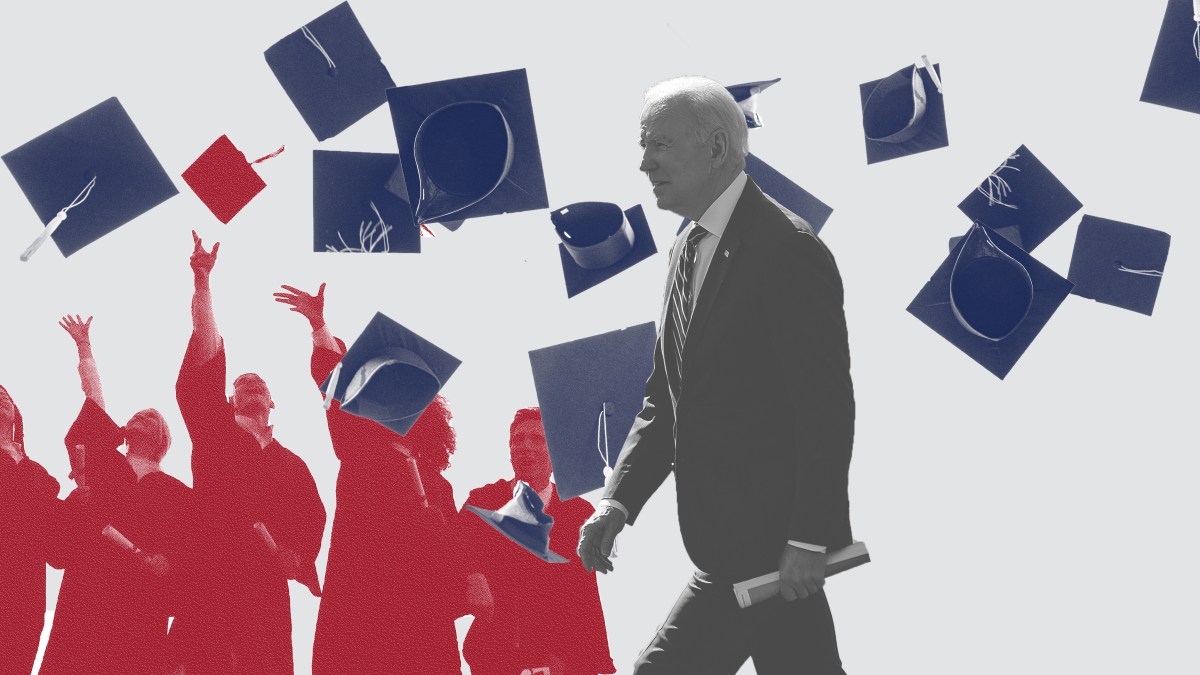 The jury is still out on this $1.6 trillion student loan debt

The two-year pause for repayment of non-private student loans is about to end. On May 1, for 43.4 million borrowers across America, the pandemic 0% interest rate will end and default collections will resume – unless the federal government decides otherwise.

With the current outstanding federal student loan debt totaling $1.61 trillion and with the May deadline approaching, millions of borrowers are waiting to see what happens next.

“The president is going to look at what we should do on student debt before the pause expires, or he will extend the pause,” White House Chief of Staff Ron Klain said. in an interview with Pod Save America earlier this month, suggesting another expansion could be in the cards.

Get to where we are

“The rise in student loan debt has been rapid and relentless,” said Mark Huelsman, director of policy and advocacy at Temple University’s Hope Center.

Between 2007 and 2020, total student debt exploded 144%. “It doesn’t happen without, you know, a series of intentional and unintentional policy choices and I would say negligence on the part of policy makers,” Huelsman said.

There has been a lack of federal oversight of state disinvestment in public higher education systems. In every economic downturn since the 1980s, Huelsman said, states have shifted the cost of college education to students. Public colleges, unlike other high-budget public spending, have what he called a “release valve,” in that students can pay higher tuition when states withdraw funding.

Along the way, federal lending policies have become less lenient to the borrower. Until the higher education amendments of 1991 and 1992federal student loans had a six-year statute of limitations, but amendments ended that policy for all loans incurred after 1986. Unlike other debt, without demonstrating undue hardship, federal borrowers also cannot no longer file for bankruptcy to get debt relief.

According to Mark Kantrowitz, the founder of finaid.orgthis is an extremely difficult standard to prove – and the guidelines have only become stricter.

Then there was a marketing shift. “There was a policy choice to promote the use of student debt as the primary means of funding college,” Huelsman said, going beyond public colleges into private and for-profit schools. Prior to this change, federal loans were a way to pay for college education, not the main way to pay for it.

When student loans became the dominant way to pay tuition, they were advertised and labeled as “good debt,” Huelsman said, on the grounds that debt would yield a high return on investment for borrowers investing money. money in their own education. This new reliance on debt has come at a time when the cost of living began to rise exorbitantlyhowever, affecting the repayment capacity of borrowers.

The rhetoric of “good debt” has not met the practices of “good lender”. According to Mark Kantrowitz, the federal government “adopted harsh punishment for student borrowers. A combination of complex debt repayments, debt cancellation plans and strict bankruptcy laws has led to a default crisis. When borrowers default on federal loans, the Department of Education may withhold federal payments such as disability benefits, social security and tax refunds. They can also garnish up to 15% of a borrower’s salary to repay the loans.

The estimated average student loan payment is $460 per month — $460 that many borrowers don’t have to save. The pause in loan repayments highlighted the emotional toll of the student debt crisis, in addition to the financial toll.

“People carry so much shame,” said Kyra Taylor, an attorney at the National Consumer Law Center who works with clients struggling with federal student debt.

Indebtedness forces borrowers to delay major life events, like buying houses or getting married. During the break, many borrowers used the money from the loan repayment to cover necessary expenses or repay other debts.

Leading economic recovery since the debt pause has begun indicates that in theory borrowers should be able to start paying soon. Taylor said things tend to be very different around the kitchen table.

“I’ve spoken to a number of borrowers who are really scared of repayment starting because they don’t know how they’re going to make ends meet when repayment starts again,” Taylor said.

What Biden can do

“There are mounting pressure on the Biden administration to propose undoing at the stroke of a pen through executive action, and there is ample legal evidence that they can do that,” Huelsman said.

For Huelsman and Taylor, it’s about providing relief to people in need, borrowers of color and black borrowers in particular. The Biden administration has touted both its resolve to resolve the debt crisis and its commitment to racial justice.

“When you know your system is disproportionately harming communities of color, it demands a solution,” Taylor said. “Another reason, for me, that this is a crisis is that our student loan system reflects the same inequalities that we have in this country. So we see structural racism come into play, we see that this burden disproportionately hurts borrowers of color, that they also have a harder time repaying their debt. They wear it longer and it complicates their ability to assume family wealth and close the racial wealth gap.

Borrowers aren’t the only ones to benefit from debt forgiveness, Taylor said, which could relieve the Department of Education of a heavy administrative burden.

Huelsman sees signs that broad debt cancellation may be on the way. “I think you can’t look any further than the fact that the Biden administration has been very vocal and proud when it’s written off student debt over the past year,” Huelsman said. President Biden also campaigned on canceling student debt, pledging to forgive $10,000 for federal borrowers.

“I think the Biden administration and congressional leaders to some degree recognize that we can’t go on like this,” Huelsman said. From his point of view, “we are past the point where nothing can be done about student debt.

“I’m absolutely confident that something is going to be done, either through executive action or congressional action, to clear some of the student debt,” Huelsman said.

For the time being, the administrative and financial experts are advising borrowers to prepare to pay again in two months. “Plan to restart repayment,” Kantrowitz said, recommending building up savings over the next few months — whenever possible — to ease the transition.