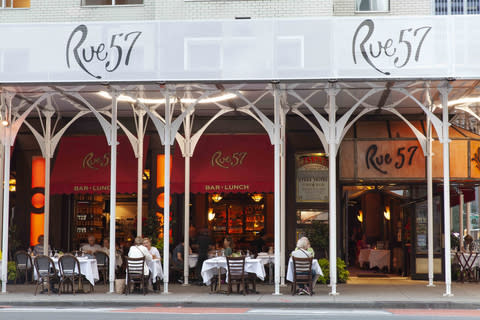 Capital will fuel expansion of production capacity, growth of secondary markets and deepening of penetration in New York

Urban Umbrella’s sidewalk shed can and has been used as an event or retail awning. (Photo: BusinessWire)

Paul Anagnostopoulos, director and director of acquisitions of Anthos, as well as Billy Gilbane of Gilbane Building Company have joined the advisory board of Urban Umbrella. More than a dozen former investors, mostly New York-based property owners and developers, also participated in the round.

With the completion of this funding round, Urban Umbrella has raised a total of $26 million in debt and equity. As of December 2021, the company’s scaffolding was installed at 100 sites across New York City.

The new capital injection will allow Urban Umbrella to continue accelerating manufacturing of its flagship product – a white, braced-free sidewalk shelter comprised of high-strength steel, translucent plastic panels, LED lighting and arched struts. which combine the strength of a road bridge and the beauty of a work of art.

“Closing this all-debt funding round is an important milestone for us,” said Benjamin Krall, Founder and CEO of Urban Umbrella. “This is a testament to the maturation of our brand and evolution as a business. Not only are we providing a unique and in-demand product, but we can be counted on to continue on our rapid growth trajectory and reach the level of profitability necessary to satisfy the conditions of this type of financing.

Demand for Urban Umbrella’s products as an alternative to unsightly traditional scaffolding shows no signs of abating. Collectively, New York City building owners spend approximately $500 million annually to install or maintain scaffolding, making New York City the world’s largest market for scaffolding products. At any one time, 10,000 sidewalk shelters are in place across the city to protect pedestrians from masonry and other debris that may fall from buildings in need of repair.

“Urban Umbrella provides a premium product that Savanna has deployed on many of our construction and development projects across New York City,” said Krista Jones, project manager at Savanna. “Their team provides an excellent user experience, combined with a unique, high-end design that really enhances our appearance when work is going on in a building.”

The pandemic has shifted the balance of power, prompting landlords to roll out the red carpet for surviving retail and restaurant tenants. Urban Umbrella is between three and five times more expensive than traditional scaffolding, but the company continues to gain traction, despite its higher price.

Urban Umbrella also plans to use the new funds to make key hires in early 2022, to continue expanding the company’s product lines and to grow its geographic footprint in markets like Boston, Connecticut and Chicago.

The company is the only one in the scaffolding industry to offer free maintenance, seven days a week, 24 hours a day.

Urban Umbrella will use some of its new capital to develop its new modular structure division, Canopies. Urban Umbrella’s sidewalk shed can and has been used as an event or retail awning, each of which combines various elements from the company’s aforementioned kit of parts. Current and past customers, including Uber, Chanel, Apple, Bank of America, Northwell Health, IMG, New York Fashion Week, and several restaurants and schools, have benefited from the non-traditional uses of the Urban Umbrella product.

“We’ve been seduced by Urban Umbrella’s product over the years,” said Anagnostopoulos of Anthos. “Now, as investors and members of the company’s advisory board, we look forward to seeing the company build on its success as it continues to break into the New York City market and create new beachheads in other North American cities.”

About the Urban Umbrella

Urban Umbrella is the designer, patent holder and manufacturer of the only alternative scaffold bridge on the market that is approved by the New York Department of Building. This unique product has been the premier design substitute for traditional scaffolding in over 60 years. In an international design competition with more than 260 applicants, Mayor Michael Bloomberg and Department of Buildings Commissioner Robert LiMandri proclaimed Urban Umbrella the new example of scaffolding for NYC. The Urban Umbrella design was chosen to help improve quality of life, reduce construction impacts on businesses, increase pedestrian safety and increase the space available for pedestrians on sidewalks. Additional information about Urban Umbrella is available at https://www.urbanumbrella.com/